It was all the way back in 2013 when OnePlus began its legacy with their first ever release, which showed great likings among the audience, reviewers and its users. Priced at a cheap £250 it showed great promise and potential, but unlike a lot of new start-up phone companies where the glamour eventually wears off and they fall into the pit of being another mass manufactured phone that follows what every other developer is making. OnePlus Co-founder Carl Pei stated “Our approach has never changed. In the very beginning, we wanted to come out and create the best Android flagship, and it was very important for us, in the beginning, to only create flagship phones. We first look at what are all the things that should be in a flagship phone that we feel will add up to a great experience, and that’s it”. Fair to say OnePlus has lived up to that statement, whereby I had the greatest pleasure of attending the official unveiling of the OnePlus 6 at Olympic Park on the 16th of May; and what an experience it was.

You eagerly sit down staring at the timer displayed on the projector, where the guy with the camera walks around taking videos of the audience and you either stare at it awkwardly or do some kind of hand gesture or throw a forced smile. Then bam the timer reaches zero, the lights fade and voila. Out-comes the Co-founder Carl Pei all set and ready for the press release of the phone we’ve all been waiting for. Carl starts off slow by introducing the project, the amount of work that’s gone into it, the amount of robust software and hardware testing that has gone into the device; and lastly showing a workshop. Where a small army of OnePlus phones are constantly run non-stop for over 18 months to imitate the phone’s lifespan for over 6 years of usage, with a 0.015% fail rate of all the OnePlus models. You think that’s impressive, over 7,000 OnePlus 5Ts were sold a minute on Amazon India last year. It was regarded as one of the best sellers of that year, but enough of the gibber gabber. Here is the OnePlus 6’s technical spec sheet. 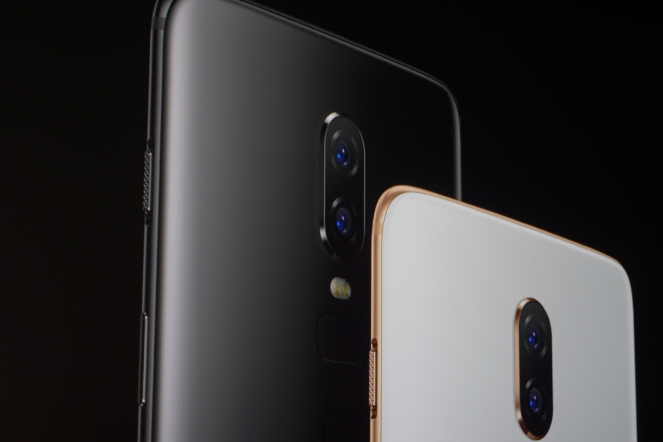 Yes, a headphone jack is also present. Though speaking of headphones, the unveiling didn’t just reveal the OnePlus 6 but it also unveiled the OnePlus Wireless Bullet earphones. The brand’s first ever wireless earphones that have been in development for the past two years, and with a special offer up for grabs. Those who order the new OnePlus 6 on its official release on the 22nd of May will also get the wireless earphones for free. That being said, the earphones will be priced at £69 ($69) where the phone itself will start at the entry level from £469 (£519) for the 64GB version.

Overall the phone looks great, its available with two colours the gloss black and matte black finish (both made out of glass) and a limited-edition pearl white with bronze edging. The fast charging capabilities mean a 30-minute charge for a day’s lasting of battery power, which is mighty impressive. From first impressions, it is fair to say the phone nailed it at the press release and having the chance to play around with the phone itself in the “experience” room. Gave a full-hands on feel for the weight, quality and even the features of the phone. A full comparison between the OnePlus 6’s competitors is to follow, with further additional press release footage coming soon.

Check out Lamborghini’s launch, the Tonino Lamborghini Alpha One, their first ever smartphone designed to compete against the iPhone X

Disclaimer: Images were taken and captured by Dhruv
Instagram: https://www.instagram.com/itsdhruvk/?hl=en